“A Natural Network for Places and People in Macedonia”

The project was developed by the Macedonian Ecological Society and Plantlife UK and is financed by the EU. Its main goal is to improve capacities of national and local organizations to engage Macedonian citizens as volunteers for the protection of nature; undertaking actions which could help towards the implementation of the EU regulations for the protection of the Natura 2000 network. The project is implemented in several regions of the country, by local partners.

“Art Point – Gumno” is the local partner responsible for coordination and implementation of the activities in the region of Ilinska-Plakenska Mountain within the borders of the Municipality of Demir Hisar.

There is no gallery selected or the gallery was deleted.

Traveling exhibition
“THE WILD PLANTS OF MY REGION”

The exhibition was initiated by Art Point – Gumno, as a local partner responsible for coordination of the project activities from the Demir Hisar side of the Ilinska-Plakenska Mountain region. Drawings, herbariums and origami from more than 100 pupils from the regional schools were first exhibited in the village of Sloestica on 28th of August 2014, as part of the traditional multimedia event “Celebration of the Pirey/Weed”.

The imagination and the enthusiasm of the volunteers as well as the public interest inspired the local partners involved in the project (Art Point – Gumno, CED – Center for Education and Development from Tearce; Mountaineering Club “Ljuboten” from Tetovo and the Ecological Society “Grasnica” from Ohrid) to expand the initial display with some photos made by the volunteers from the region of Sharra Mountain and the Ohrid side of Ilinska-Plakenska Mountain and to organize a traveling exhibition.

On March 21st, the exhibition was opened in the Home of culture “Grigor Prlicev” in Ohrid. The event was hosted by ES “Grasnica”. 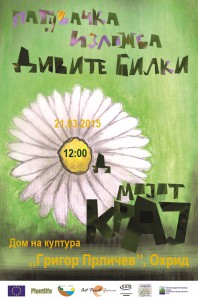